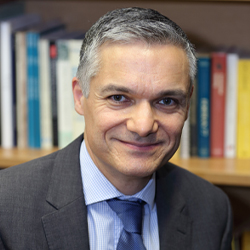 Professor Brian G. Falzon joined Queen’s University Belfast in 2013 as the Royal Academy of Engineering – Bombardier Chair in Aerospace Composites and is currently the Head of School of Mechanical and Aerospace Engineering. Between 2008 and 2012 he was the Foundation Chair in Aerospace Engineering at Monash University in Melbourne, Australia, where he was also Director of Research and Head of the Aerospace Engineering programmes. Between 1996 and 2008, Prof Falzon was at Imperial College London where he joined as a postdoctoral research fellow before becoming an academic staff member. Prof Falzon is the Director of the Advanced Composites Research Group at Queen’s and is internationally renowned for his work on the computational analysis, design, manufacture and testing of advanced composite aerostructures. He has published over 180 peer reviewed journal/conference papers and book chapters, one book, and edited three others. In 2008 Prof Falzon was awarded the George Taylor Prize by the Royal Aeronautical Society for the best paper published in 2007 in the design, construction, production and fabrication of aircraft structures. In 2009 he was honoured with an Australian Leadership Award, in recognition of his contribution to issues of national importance and demonstrated leadership in his field. He is a Chartered Engineer, a member of a number of professional organisations/scientific committees, and sits on the Editorial Board of three journals.

Manage Cookie Consent
To provide the best experiences, we use technologies like cookies to store and/or access device information. Consenting to these technologies will allow us to process data such as browsing behaviour or unique IDs on this site. Not consenting or withdrawing consent, may adversely affect certain features and functions.
Manage options Manage services Manage vendors Read more about these purposes
View preferences
{title} {title} {title}